Inside the tank of Festa Dolphinarium 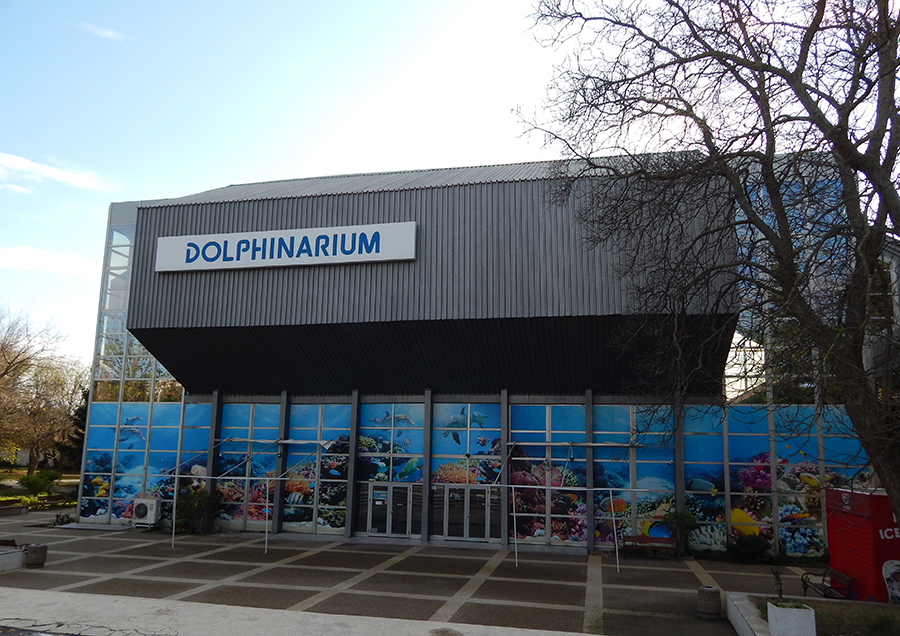 The average lifespan of dolphins in captivity is 12 years, 9 months and 8 days, compared with between 30 and 50 years for dolphins in the wild.

Early mortality in dolphinariums and aquariums is observed among all cetaceans, not only dolphins. This is due to the combination of the unfavorable factors that inevitably go hand in hand with life in captivity – stress, despair, limited space, unnatural environment, separation from family, inability to exercise their natural behavior.

Dolphins caught in the wild survive longer in tanks and aquariums than dolphins born in captivity. The infant dolphin death rate in captivity is estimated to be 52%, while that of wild dolphins is 17%.

The statistics are based on data from Ceta-Base, the world’s database of cetaceans in captivity. At the Festa Dolphinarium, since its opening in 1984 13 dolphins have been documented (5 are still alive today). However, 3 of the 4 unregistered dead babies reported by the Dnevnik website last year have not been listed. Such omissions make us wonder – how many more babies were born and died in that tank without anyone knowing?

We started Googling and answers began to appear. Among the articles and materials about the dolphinarium, we noticed identical PR texts from the same template were abundant and have been published on a periodical basis over the past 20 years. Only the names of dolphins that have been alive at that given time were updated. The same is observed in the history of corrections made on the Dolphinarium’s Wikipedia page.

In other interview articles and quotes from dolphinarium employees, we see that, just like in their PR templates, the statements they make to the media have remained unchanged over the years. Although dolphin names are constantly changing, the dolphinarium keeps repeating about every newborn baby that this is the first dolphin born there birth since Bimbo in 2003.

“Before this, the last birth in the dolphinarium was four years ago, when Bimbo was born.”
Darik, 2009

We found traces of 12 more dolphins (two caught in the wild and 10 babies born in the dolphinarium), other from those mentioned in Ceta-Base and those revealed in the Dnevnik articles. In total, this adds up to 28 dolphins that have been held captive in Festa Dolphinarium in Varna from 1984 that we know of. You can read a small part of their sad stories in the timeline below.

All tanks and aquariums have limited capacity, however breeding programs never stop. Most babies don’t survive, and few grow up to replace other dolphins who can no longer perform in the show. Excess animals can always be sold for profit, this is first and foremost a business.

One of the factors contributing to the high mortality of infant dolphins in dolphinariums is that many of them are the result of incest. This is unavoidable in marine parks that breed animals. In mammals, incest often results in unhealthy births, birth defects, and a particularly high number of stillbirths. A common practice, including in Bulgaria, is for the captive facility to buy several animals (at least 2 – male and female) of a species (eg. dolphins, sea lions), and then start breeding them. Most babies die, but rarely one survives and grows up. Once it reaches puberty, it becomes the next potential parent and is immediately enrolled in a breeding program where it will be forced to copulate with her mother and sister if it is a boy or give birth to her father and brother’s children, if it is a girl.

This is the story of Yoanna, the mother of the baby dolphin who died in august 2019 only 9 days after its birth during the show at Festa Dolphinarium in Varna. The baby’s father was Kimbo, Yoanna’s brother. This type of pregnancy is neither a precedent nor an incident in the Bulgarian dolphinarium, where no measures whatsoever are taken to prevent inbreeding. On the contrary, they encourage it. Yoanna’s last known baby was stillborn two years earlier, and many others have had the same fate.